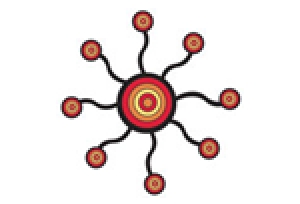 The Information Superhighway meets the Dreamtime in the efforts of a Newcastle-based organisation dedicated to the revitalisation and preservation of Indigenous Culture.

Arwarbukarl Cultural Resource Association (ACRA) was established only in March this year but has taken off in a big way in it's link to the past.

As part of an ongoing project commited to this idea, the two men behind ACRA recently took part in a week long field trip to Lightning Ridge in the State's far west, where they utilised the unique opportunity to record the teachings of a highly respected Aboriginal Elder.

Seventy-five-year-old Murriwarri man Roy Barker senior, who initially learnt his skills from Elders of the old Brewarrina Mission, welcomed ACRA's Daryn McKenny and Abie Wright in a manner that was 'willing and trusting', according to the two young men who take very seriously their role as cultural ambassadors and - to their knowledge - are the only 100 per cent Aboriginal-owned and operated organisation that has been lucky enough to record the traditions of Uncle Roy, who is believed to be one of the last genuine stone and tool makers in New South Wales.

Both Mr McKenny and Mr Wright, who spent a week with Uncle Roy at Lightning Ridge, recorded the unique and genuine art of stone and tool making on both video and film and hope the footage will go a long way in their efforts to preserve and promote Aboriginal Culture.

The special recordings will take pride of place in ACRA's archival footage and will assist in the training of Mr McKenny and Mr Wright, who will then take on the role of teachers in their efforts to target the Aboriginal community in establishing and maintaining a geographically-specific link to their traditional past.

"Alot of people think that Aboriginal Culture and Language is dead and gone and it has no use. However, our organisation sees that language and culture is the key to our identity. We want to see a meeting of traditional and modern ways to increase the chances of survival for our culture, which in turn is our identity," Mr McKenny said.

Both men hope that the very special footage will play a major role in using Information Technology to preserve and disseminate Aboriginal Culture throughout Aboriginal communities in the Newcastle and surrounding areas.

They are both 'fully aware' of the unique opportunity they have been given and acknowledge they have gone to the very top in the State in seeking out the relevant information from this very special Elder.

"In our week with Uncle Roy he showed us how to make traditional tools and weapons for us to be able to preserve and pass on his very special knowledge, which has now been preserved for using Information Technology," Mr Wright said.

The field trip forms part ACRA's general language and cultural awareness program and it is hoped that several other specific projects will be established in the near future as part of their wider agenda.

"By undertaking this particular project with Uncle Roy, we hope to have the ability to empower our Aboriginal future generations to hold onto and not let go of their Culture. We are looking to give Aboriginal people the chance to utilise this unique opportunity to connect with their identity," Mr Wright said.

"We are now going to use this material to be able to put this culture into geographically specific practice."

ACRA's future activities are expected to include a wide range of culture and language projects, includes basket weaving, language classes, bag weaving and tracking, to name just a few.