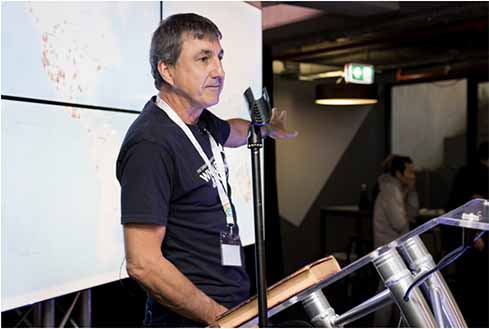 Daryn McKenny is the Founding Director of Miromaa Language and Technology Centre in Newcastle, New South Wales. He was born and raised on Awabakal country and acknowledges his traditional ties to the Gamilaraay and Wiradjuri nations.

Daryn was an attendee of the 2018 and 2019 Indigenous Mapping Workshops (IMW). We recently caught up with Daryn to discuss how the content and learning experience of previous workshops has aided him in his work in conserving Indigenous languages.

Daryn, how did your journey with the Indigenous Mapping Workshop begin?

In 2012, one of my staff members attended a Google Maps workshop that was held in Sydney. The workshop was run by the Google Earth Outreach team and Raleigh Seamster who now sits on the Indigenous Mapping Workshop Australia Steering Committee.

Miromaa represented one of the very few Indigenous organisations that attended this workshop and we were certainly the only Indigenous group that was focused on language conservation and how we can map our knowledge through language.

When the IMW Australia launched its pilot in 2018, my team and I were very excited to get onboard.

Can you tell me about some of the work that you do?

I am lucky to have a role where no two days are the same. Although I am based at the Miromaa Language and Technology Centre in Newcastle, I am constantly travelling to different language programs, language centres, ranger groups, community groups and land management organisations throughout Australia.

My day-to-day is centered around language conservation and language education. But first and foremost, my work is about demonstrating the importance of Indigenous languages within Australia at an intrinsic level.

The IMW has allowed me to gain a deeper understanding of the importance of mapping and documenting our knowledge systems through maps. It has also reinforced the important role that languages play in Indigenous heritage.

How has the IMW helped you in your work in language conservation?

At the IMW 2019, I attended the MyMaps, Google Earth and 3D Story Maps sessions. The knowledge that I gained from these sessions assisted me in developing and delivering our very first language focused mapping workshop for Aboriginal and Torres Strait Islander people.

The workshop, ‘Mapping & Caring for Country Through Languages’, was delivered in August  2019 at the Australia National Language and Technology conference in Darwin.

The initial support from Raleigh Seamster, along with the support and skills that we gained from the IMW has greatly helped us to develop our own language specific workshop.

Many of the training materials that we shared were based upon the Google Earth and MyMaps presentations that we learnt at the IMW.

The ‘Mapping & Caring for Country Through Languages Workshop’ was a great success. We had 55 people attend, which was the maximum capacity, and I am still hearing how much our attendees enjoyed the workshop.

What makes you return to IMW every year?

For me, being part of the IMW is all about learning from the different groups who participate in the workshop. It is a chance for us to share what we do and potentially provide support for other organisations around Australia.

At Miromaa Language and Technology Centre, we are always looking for ways that we can support other Indigenous groups that we meet. Given that the IMW primarily hosts Indigenous rangers and land care management groups, I see the workshop as a great opportunity to learn about the ways that mapping can be used as a tool to communicate Indigenous heritage, environmental knowledge and biodiversity management.